The Lanyang Museum is built on the former site of the Wushi Harbor. This historic location reflects the rise and fall of the harbor and integrates the natural landscape. The county government chose to build the new museum beside the old Wushi Harbor in order to preserve its former location, and integrate the Wushi Reef, the Wetlands and Guishan Island into the design. Dayuan United Architects completed the project. 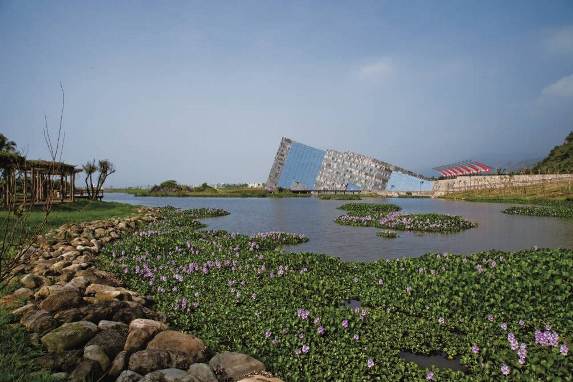 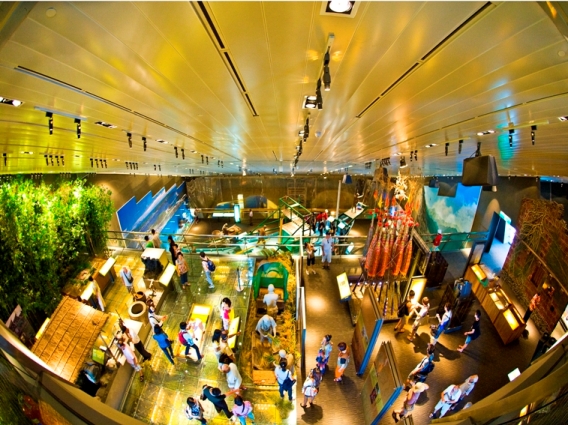 The cuesta shaped edifice of the Lanyang Museum was completed in 2009. The highest point of the main structure faces east towards Guishan Island. The building continues to the southwest and gradually cascades into the ground below. The triangular cube shaped structure calls to mind the mighty stone face of a mountain and complements the nearby Wushi Reef. The walls of the structure are built from a combination of stone and cast aluminum. This calls to mind the colorations and ambiance of thousands of acres of Yilan farmland that change with the seasons.

Apart from the Lanyang Museum, the 14-hectare garden also includes the Wushi Harbor Environmental Education Center (Wushi Harbor Ecology Station), which began construction in 2004. The area is home to various cultural heritage sites, including the Old Wushi Harbor Heritage Site and the Lin Cao Cemetery. These sites come together to give the campus a strong sense of local history, culture and natural beauty. 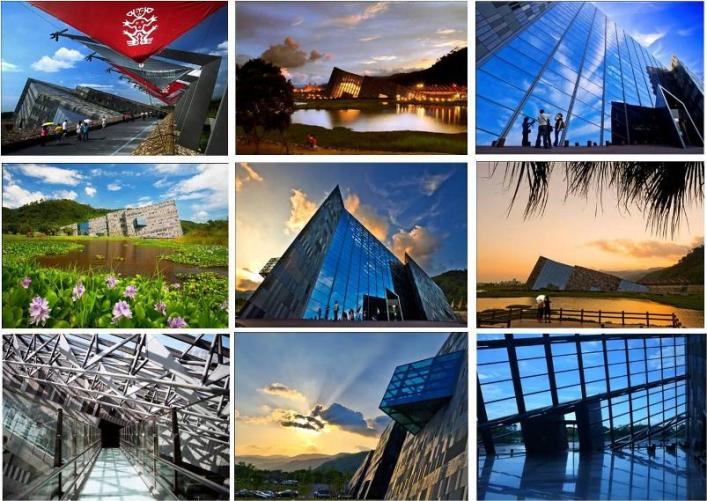 The main structure of the Lanyang Museum takes an artistic approach to the space. The building aims to integrate into the landscape by incorporating various natural elements. The space adheres to the spirit of public art in terms of its public nature, its overall integration with the natural environment, and its aesthetics. Therefore, beginning in 2010 the Lanyang Museum followed the Regulations Governing the Installation and submitted a proposal to Council for Cultural Affairs, Executive Yuan to be declared public art. The museum used a budget of NT$10,400,000 to complete ten public art projects fostering public participation, expanding education programs, cultural marketing, and environment beautification projects. As of April 19, 2017 the Ministry of Culture agreed to classify the Lanyang Museum as public art.

Located in the Northeastern corner of the Lanyang Museum campus, the Wushi Harbor Environmental Education Center (Wushi Harbor Ecological Station) was completed in 2004. The building is meant to resemble a sailboat docked at port. The building highlights the unique location of the old port, the river, and the modern Wushi Harbor. The design is inspired by a transparent box, which expands the field of vision in the interior and captures where the old and new port come together on the water. The building aims to complement the natural landscape and cultivate a common aesthetic.

There is a parking lot to the north and a shuttle service to the new Wushi Fishing port on the eastern side. To the west is the site of the Wushi Harbor during the Qing Dynasty, which faces the main building of the museum. This spot is one of the best sites for whale watching in Taiwan. It has also served as an important transportation hub since ancient times. On January 1, 2016, the space became an affiliated gallery of the Lanyang Museum in order to encourage ecological study, integrate the museum family, and better serve our patrons.

The Nanfang’ao Fishing Cultural Museum is located in the heart of Nangfang’ao, facing the Tofu Cape Recreation Area. The former site was established by the Executive Yuan in 1981 as a sea defense post for the Coast Guard. A level RC wall surrounds the structure, and the lookout incorporates a whitewashed courtyard, which reflects the Coast Guard’s protective mission.

Once the mission was completed, the land was returned to the National Property Administration of the Executive Yuan’s Ministry of Finance. The government agreed to convert the space to an affiliated gallery of the Lanyang Museum on November 27, 2009. Lanyang Museum also launched an investigation into the history of the fishing industry. Recorded interviews of former fishing captains and the promotion of seafaring culture is an integral part of protecting and promoting the Nanfang’ao Fishing Cultural Museum.